The Continuing Saga of Nero 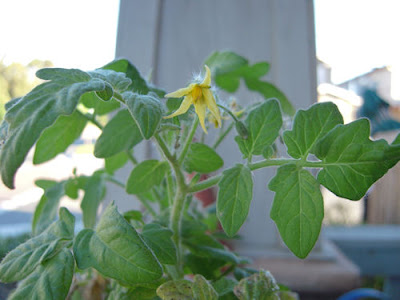 Nero lived in the house for a few weeks, moving from room to room, chasing the sunlight, living the sweet life of central air and consistent watering. I was afraid to put Nero outside because every other plant I've had here that has lived outside, I've killed.

But, Nero began to look a little sad. He longed for the freedom and fresh air that only the out-of-doors could provide. And, no matter what music I played for him, no matter how many horror stories I told him about "the outside world" (cue dramatic music), he continued to droop and wilt under the oppression that is a roof.

Right around the time I figured he was doomed, I had smothered him with my over-protectiveness and over-mothering, I figured I couldn't do much more damage if I killed him on the front porch. Plus, then he could live out his last few days the way he had always wanted to... free to enjoy the birds and the bees and the fresh air. So, I put him out in the sun, gave him a liberal sprinkling of water, and crossed my fingers.

It helped a little, but Nero still didn't seem fully healthy. So, in my infinite wisdom, I decided he needed a little bit of plant food... then I remembered! I was missing a key ingredient! My brown thumb only turned green once I found Eleanor's! I ran to the store, picked up a bottle, came home and mixed ShortBus's little Nero a cocktail!

Literally, the next day Nero was taller. Standing up straight and happy, and he had also developed a little flower. FOR REAL! I was so excited! Nero was going to live! 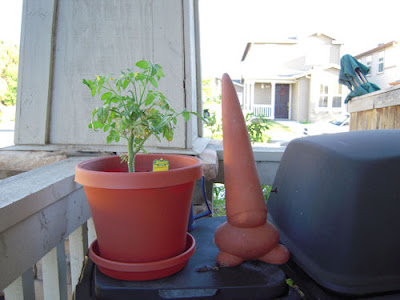 That was about a week and a half ago.

I check him every day, water him when he needs it (with Eleanor's every time... I swear if I ever meet that woman I'm going to kiss her full on the lips), I've trimmed dying leaves, and speak loving words of encouragement to him on really hot days.

This morning I stepped out on the porch, and decided to move him into the direct sunlight for a few hours (he'll go back into the shade when it gets really hot later), and thought about watering him... maybe giving some of his bottom leaves a trim, when I saw it. 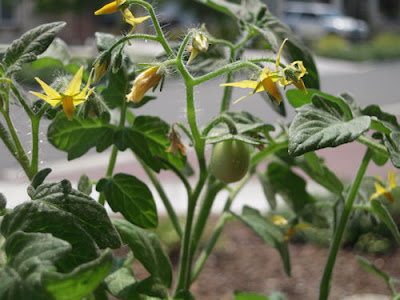 A Tomato!! Nero is going to reward me for all my dedication and hard work! I can't wait to see the look on the ShortBus's face this afternoon when I show him the little tomato I promised him his plant would grow! 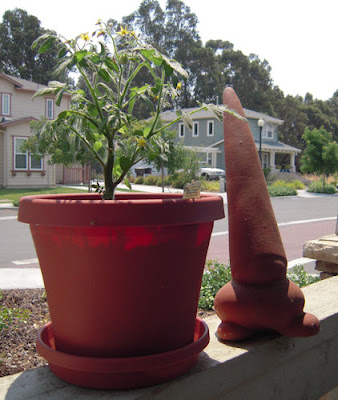 I also noticed something else. Nero has adopted a couple of his own little pets. Its like he moved out, got settled, and now has his own little family... a baby tomato, and two little companions frolicking around his pot. 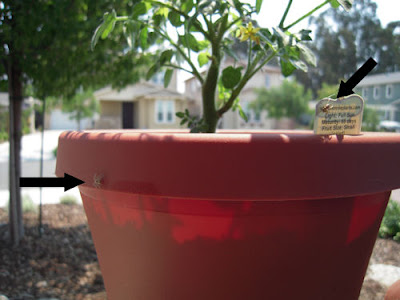 Check you out Ms. Greenthumb! ShortBus is going to be so excited to see Nero's little tomato!!!

That is so exciting. I kill plants.... inside and out.

Hooray! Like Archerybabe, I am also a murderer of green things, so good on you.

So are you bringing that gnome to Camp Naughty? heh.