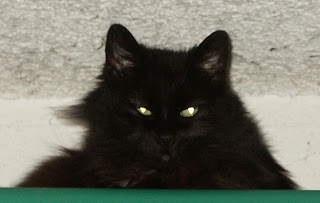 I was 19 years old, my roommate's girlfriend announces that her cat is pregnant, and asks me if I want a kitten. Ex-husband (at the time he was 'boyfriend') says no... is adamant about it... we are NOT getting a pet. I look at her and say, "if one of the kittens is black with blue eyes, I'll take it." I thought, no way that's going to happen. I mean, how common could it possibly be?

A couple of months later, she shows up on the doorstep with a kitten. Solid black, bright blue eyes, and I have a new pet.

Chloe was a ball of energy, and feisty... she had to be, living in that house with all those guys, constantly roughhousing... she filled the role of dog for quite a while. She was one of those cats that would come streaking into the room from nowhere, climb the drapes, then jump from the top and run out of the room again. More than once, I remember looking at whoever was sitting next to me, and saying, "did that just happen? crazy cat."

Every night (from her first night with me), she would curl up at my chest, and fall asleep purring loud enough to keep the neighborhood awake.

The one time she ran away, I was heartbroken. Two and a half weeks later I got a call at work, "I think I have your cat." She was two miles away, and had been living in someone's backyard, I was so relieved that she was alive that I sat down in a stranger's back yard and cried. From that day on, she was an outdoor cat. Still friendly and loving, she never left the yard or garage, but she wanted nothing to do with being in the house.

She lived 14 years.
Kinda makes me feel old to think that my first pet (after moving out of my parents house) died of "natural causes."
Makes me sad to find out a week later from my 3 1/2 year old.
posted by Giddy. at 2:25 PM

I am so sorry for your loss and so pissed off that you had to find out that way.

I am sorry Chloe is gone. It sounds like she had a wonderful life though.