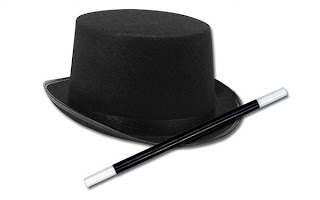 At a time when many people are waxing nostalgic, writing blogs about the past year, or creating top ten lists and resolutions, I feel kinda silly writing the obligatory New Year's Eve post.

I could easily write about what a wonderful year it has been, but I feel I've already done that.  If you want to read about all the great things that have happened in my life over the last year, you could easily go back through my archives and read any of the things I have posted.  Yet, somehow, as I sit here with my cup of coffee watching a Three Stooges marathon with CSB on the final morning of 2009, I feel compelled to create one last post for the year.

I feel so very fortunate for the family and friends that I have.  The people in my life are a huge part of what has made it such a fantastic journey.  Living my day to day life with CSB has been nothing short of spectacular and there has been more than one instance when I stopped, looked around, and thought, "I don't know what kind of crazy magic this is, but I have exactly what I've always said I wanted."  Somehow, I got exactly what I wished for... and it came out right.

The ShortBus grows ever more intelligent and charming by the day.  He is growing up quickly, and I love having the ability to experience life all over again through his eyes.  Living so close to my parents has been great for all of us, I feel quite lucky to have such amazing family so near.

As my "winter break" draws to an end, my brain is starting to switch back on and my "to do" list is beginning to come back to life.  Although my mind is a constantly humming hive of upcoming events, I am ever living in the present and enjoying the now as much as all the prospects for the future ahead.

Happy new year everyone.  Remember:  the future is now, all we have is this moment.  Live well, live right, but most importantly, live.
posted by Giddy. at 6:20 PM No comments: 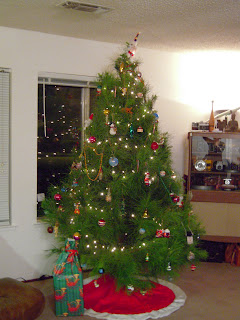 Stuck somewhere between my heart and my head is a Christmas post.  It has been bouncing back and forth, working itself out, attempting to form coherent ideas and sentences for the last week or so.

I feel a bit like the Grinch this year... not the beginning of the movie grumpy Grinch, but the end of the movie Grinch after his heart has grown three times its original size.  It feels like it has been so long since I have really, truly enjoyed the holiday season.

As I sit here this Christmas eve, listening to the ShortBus helping CSB wrap presents and asking a million questions about Santa and Rudolph, I can't help but grin.  I can't imagine a more perfect end to a wonderful year.

Now that the Fair/e season is finally over and we can finally sit back and take a break (pretty much the first full weekend off since sometime in August), I can truly reflect on all that has contributed to my happiness and what a truly amazing year it has been.  I don't even have the words to express how fortunate I feel and how thankful I am.  My Christmas wish is for you all to have serenity, peace, balance, freedom, joy, and love in your lives.  May it not only exist in your world tomorrow... but each and every day. 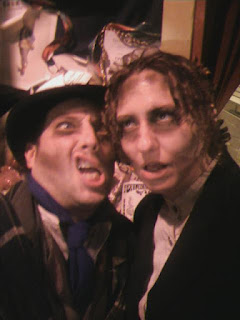 I know it sounds silly, but having the opportunity to be a zombie last Sunday night was one of the highlights of my life.

Having heard a "rumor" early Sunday morning about a zombie flash mob happening after close at Dickens, I quickly filed it away under "amusing notes for the day," and didn't really think much of it.  Throughout the day I really didn't hear anything else, and for the most part completely forgot about the whole victorian zombie concept.

Around 4pm, we figured it was about time to take TheGlen to the airport, and said our goodbyes, not planning to return to the Cow Palace that evening.  But, once we left the airport and realized how early it was, we decided a couple more hours of Dickensian fun couldn't hurt and returned to the Dickens Fair.  It was later that evening one of the guys approached me and asked, "so, are you going to be a zombie?"

The thought hadn't even occurred to me.  The first thing out of my mouth was, "Can I?  Yes, please!"

We wandered over to the right place at the right time but when the call for "background zombies" came, I hesitated.... for about half a second before tugging on CSB's sleeve, and dragging him into position.  We waited eagerly for make-up to come by and dust us with black accents then giggled our way through the first rehearsal.

It was great fun.

I think it was near the middle of the whole thing when I realized just how nice it is to have a "partner" in life.  A person who enjoys many of the same things you do and who is right there by your side when acting silly is the order of the day is just as important as someone who has your back if things go wrong.

Before I get any more schmoopy.... I am proud to present for your viewing pleasure, our bit parts in: Victorian Thriller

(at about 21 seconds in, mid-screen there is a very large man in a light colored top hat about center screen behind the dancers, CSB and I are on either side of him.  If you can find that guy throughout the video, you can find us.)
posted by Giddy. at 8:48 PM 2 comments:

CSB to the Rescue 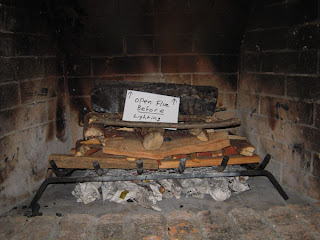 I came home to all kinds of amazing and wonderful...

But just now, I noticed the above... even though I've been sitting next to it for a couple of hours now.

It is the best laugh I've had all day. 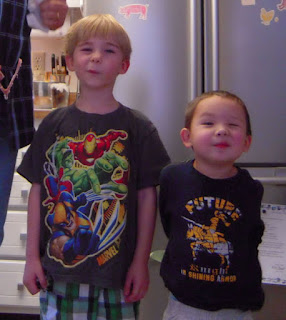 When the SlobberBeast was born, I had all kinds of thoughts about what great friends he and the ShortBus would have, and what great memories they would have growing up together.  Now I just hope they have the chance to get to know one another a little, and maybe have some fun together every once in a while when they get to visit.
posted by Giddy. at 8:18 PM 2 comments: