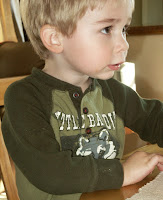 I always told myself this blog was solely mine. No posts about the Short Bus (unless they were inappropriate for his blog), he has his own place on the web... that is for him, this is for me. But, sometimes (most times) our lives are one. It is very difficult to post about me and not include him. Honestly, I thought it would be easier.

The Muse pointed out earlier today that I hadn't posted about the Short Bus in a long time. And, yes, I know I haven't. Because things in my life have been so chaotic, I haven't posted specifically about him. Maybe that makes me a bad mom, maybe it just makes me a slacker in chronicling his life. Maybe for the first time since I became pregnant (three plus years ago) I am finally taking some time for myself.

Its funny, I have friends that to this day say, "its like magic, one day I heard you were pregnant, and now you have a two-year old. How did that happen anyway?" Yes, it was like magic... for a lot of people. Between faires, I got pregnant, had a kid, and returned as if nothing happened (a little fatter, a little milkier, yet, still the same person they had always known). It was by design (not the pregnancy, but the fact that I went into seclusion).

Honestly, I'm still trying to figure out why I spent ten months in hiding. I feel like I have so many reasons, so many explanations, yet none of them are exactly right. I really am starting to think that the "why" doesn't really matter though.
I'm back. And, I'm not going anywhere ever again.
posted by Giddy. at 6:06 PM

all hail you. he doesn't have to go into hiding for you to be you!

Very true! What a little cutie! Glad to hear that your two worlds are not colliding but meshing nicely.