(I stole this from Glen's Triblog... Just too long to put under QOTD, but I really love it, and wanted to share it with you...)

I will present you
parts
of
my
self
slowly
if you are patient and tender.
I will open drawers
that mostly stay closed
and bring out places and people and things
sounds and smells,
loves and frustrations,
hopes and sadnesses,
bits and pieces of three decades of life
that have been grabbed off
in chunks
and found lying in my hands.
they have eaten
their way into my memory,
carved their way into
my heart.
altogether
- you or i will never see them -
they are me.
if you regard them lightly,
deny that they are important
or worse, judge them
i will quietly, slowly,
begin to wrap them up,
in small pieces of velvet,
like worn silver and gold jewelry,
tuck them away
in a small wooden chest of drawers

So, today at work, the DIRECTOR of the place got caught in a lie.

There have been some rumors, among the staff, about one of our social workers being ready to snap. She's been 'ready to go' for a while. The students really had no idea, but those of us who have been doing this for a while know the classic signs of burnout. And, trust me, 'special ed' has a HUGE turnover.

This morning, when we saw this social worker's van backed up to the administrative building, and she was obviously packing her stuff, the residents started freaking out.

At that point, I couldn't answer any of their questions. My only response was, "I don't know, lets wait and see, I'll ask Director Lady, let's not jump to conclusions."

Knowing full well that every single one of these kids has abandonment issues, and all of them based on their parents, I knew this wouldn't turn out well. Already, these kids were starting to lose their minds, they all know the signs.

Apparently, one of them was told that the Social Worker was sacked. I don't know the full story, she may have been canned, she may have quit. But, when she literally ran to her mini-van, and peeled out leaving the parking lot, we were all pretty sure she didn't plan to come back. No good-bye, no final word for the residents, just an extended middle finger in the form of exhaust fumes and melted tire tracks.

Two kids had to be physically restrained to keep them from hurting themselves or others. I simultaneously talked down three others from whatever behaviors they were threatening (from cutting themselves, to running away, to "fuckitall no one cares, my social worker doesn't even care"), and all the while giving sly dirty looks to the "Cool Kids" trying to get them to stop provoking the others.

As soon as things were somewhat in hand (meaning no one was trying to kill themselves or anyone else) I went to Ms. Control Freak and Mr. Teacher and said, "look, I know things are crazy right now, but one of you needs to call Ms. Director Lady, and have her come over here and talk to these kids... they need to know what's going on, WE need to know what's going on. It has to happen now before things get worse."

That's when things got worse.

Ms. Director Lady and Other Social Worker Lady show up in the classroom. We get all the kids settled (relatively speaking), and Ms. Director Lady starts talking. And, she starts lying. Its not that she's a bad liar... but, these kids have been consistently lied to for as long as they've understood language. Many of them know bullshit when they hear it, and they are ready to call you on it.

And one of them did.

And it got ugly.

Yes, that sent a majority of the other kids one of two ways... sobbing uncontrollably, or into fight mode. Yes, kill the lying white trash... it's the way of the 'hood. And really, how does one decide between comforting the kids who are sobbing, and trying to stop the others from killing this lady who just basically fucked them over? I chose the crying kids. She chose to lie... let her deal with the consequences of her actions.

Her answer? Promise them all ice cream (and then later, pizza for next week) and put the house on lock down for an hour...then run away and leave us to deal with the fallout. Freakin' awesome.... wish I had a PhD and could think like that.

I know it's odd, but one of the parts of my job that I really appreciate, when I really know I've somehow touched a life.... when a child who has threatened my life (thank you Danger Gril... her spelling, not mine), who has cussed me out, and told me she hates me, comes to me sobbing, and I can hold her in my arms and tell her "its going to be ok, I'm still here for you. I'm not going anywhere." And she, after that hug (which, I'm pretty sure I'm not technically "supposed" to do, but "the rules" can just suck it sometimes), feels a little better... and instead of assaulting someone, feels supported and cared for, and goes on to have a great day... those are the little victories that make my job worthwhile.

When I can pull a kid back from the edge of insanity by getting them to look me in the eye and promise me they won't hurt themselves, then use humor to get her to smile at me, those are the moments that make this job worth it. 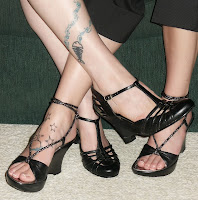 Out of the mouths of babes...

I was listening to my mp3 thingy while making dinner, when The Short Bus walked into the room...

a couple of minutes later....

Worse than the Kids

But, some days, the staff are worse than the students. I honestly don't remember another time when I've been so close to walking off a job... rent be damned.

In a job like this communication is imperative. The staff at this type of facility spend most of their day attempting to teach the residents how to communicate effectively, how to get their needs met without resorting to violence, how to act "appropriately" so that they can be a part of the community again.

When the adults can't even accomplish this for themselves, I don't know how we can expect them to model the behavior for the kids. It really truly makes my stomach turn, and my heart hurt to see adults behaving worse than the messed-up kids they deal with.

"If there be words of kindness
Words of praise
Words of encouragement
Speak them now.
Listen to your heart and respond.
Someone, somewhere is waiting
For your words."

About three weeks ago, I started working... for the first time in three years.

Day one was tough, I had to be in Oakland early for an 'orientation' meeting, so I spent the night in the bay area so I didn't have to fight commute traffic, and spent the morning crying as I was getting ready to go. My first day back to work, Short Bus's first day at "school," and I didn't get to kiss him good-bye. There was no 'mommy taking him' to the first day of school (daddy doing it is going to scar me more than him, for sure), mommy being there to explain that I'd be back, I'd be there if he needed me, I was 100% accessable to him....and even though I spent the several days before explaining it to him, it still hurt not to be able to remind him that morning.

And, as I'm coming up on my fourth full week of work (wow, that was fast), I still have that mommy guilt. Short Bus's first day of school, and I was busy working. I suppose that's one of the downsides to divorce, I'm not necessarily going to be able to be there for all the 'firsts' anymore...though, I'll be there for some different 'firsts' and that will be great too.

This job is very similar to what I've done in the past, for those who don't know, I work with developmentally disabled and emotionally disturbed children/teens. This specific group is comprised of 9-10 teenagers (14-18 years old). The facility is residential, the kids I work with go to school and live on site, they are lucky if they get to leave for an 'outing' once a week. I am one of two "instructional assistants" in the classroom, although for two hours before school I am in the house helping them wake up and get ready for the day, and for an hour after school I sit in on group therapy, and help facilitate the meeting.

Of the 9 kids that I spend my day with; all have mild to moderate mental retardation, 5 have post traumatic stress disorder (PTSD) from some type of abuse in their past, 1 is bi-polar, 1 has dementia (basically meaning she hears voices and has hallucinations), the 4 without PTSD were neglected as infants and toddlers (so much so that they were removed from the home), 4 of them were born either with fetal alcohol syndrome or 'crack babies' (yes, born addicted to meth. how's that for a start in life), 4 have been diagnosed with Oppositional Defiant Disorder (to say they have issues with authority is an understatement), any of these kids could go to juvenile hall with one phone call. We are their last stop. A couple of them have already been, and were sent to us when they got out, because no one else would take them.

All of that sounds much worse than it is. Yes, these kids have problems. But, they are all very functional, they just have some issues with social skills. I did consider throwing my hat in the ring over at tard-blog, but my kids aren't necessarily 'tards'... not in the really funny way anyway. I am planning to write a few 'work' blogs... we'll see how it goes, what comes up. Interesting stuff does happen every day... the question is, how interesting is it? Maybe its only interesting to me...
posted by Giddy. at 11:36 PM 2 comments: