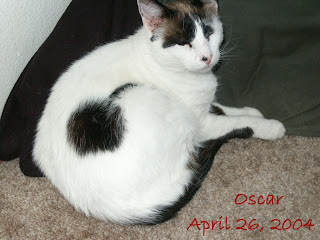 All day on Tribe, I've been watching the latest meme go around, and reading the responses, and thinking about each person who has posted.

I do have words. Many words. For each of them. I can't narrow it down to just one per person, so I decided to do a list of words. See if you can figure out which ones are yours (oh yes, everyone has more than one, and many overlap)...

As I'm watching and thinking, and reading, and words are occurring to me randomly throughout the day, a thought arises: I could actually sit down with each and every one of my friends and tell them exactly what it is that I love about them.

Definitely NOT something I have had the luxury of saying about everyone in my life over the years.

Thank you all for being an important part of my life.
posted by Giddy. at 9:38 PM 4 comments: 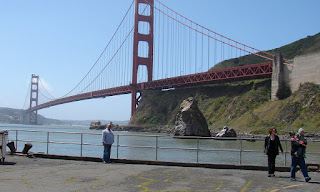 I really do love to show off our City. San Francisco is one of my favorite places in the world, and being able to spend time seeing the "sights" is so much fun.
I got to play tour guide today, and I think I did a pretty good job, if I do say so myself. Well, I didn't get us lost anyway. I had a great navigational assistant (though, quite the smart ass, he at least kept us going in the right direction... and kept me laughing), and the peanut gallery of hecklers in the back seat kept their commentary to the sights (versus my at-times-questionable sense of direction, & timing).
It was a beautiful clear day, even warm at times. We were able to fit in the Palace of Fine Arts, a drive across the Golden Gate bridge (complete with a short walk around underneath), lunch, a drive down Lombard street, and finished at the beach. The Short Bus liked the beach the best, he had a bit of freedom, and was able to play in the sand for a while. I personally enjoyed the whole day; good friends, lots of laughs, yummy food, beautiful scenery... did I mention good friends? Yeah, I think that was the best part.
posted by Giddy. at 9:16 PM 2 comments: 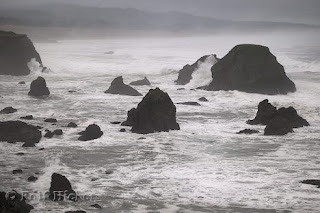 Yet also a day, where, despite the weather, I accomplished a lot. I had a great surprise this morning in a sneek-preview of a new album I'm greatly anticipating (and it is wonderful). I'm getting ready to enjoy a nice quiet dinner with my son. The rain really is beautiful.

Tomorrow is a new day. We're going to spend the day 'touring' San Francisco.
It will be better. It will be good.
posted by Giddy. at 5:53 PM 2 comments: 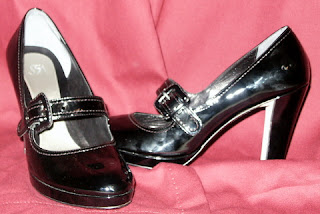 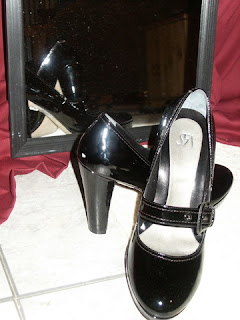 Better View of "The ShortBus Zone": 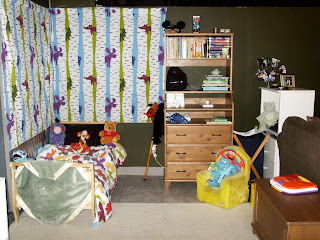 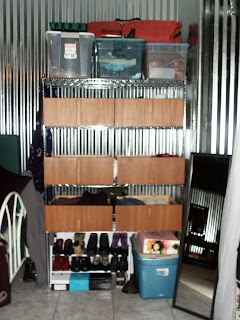 The other one just has too much stuff to take the sheers down, but I think I'll go out and get some fabric soon, maybe some curtains or something. Its also worth noting that both of those shelving units are Tela's, not mine... I appreciate the loan. 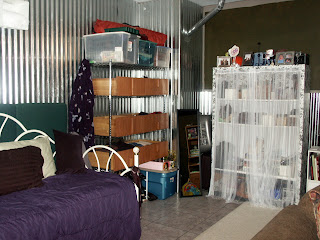 The move is nearly complete! I have one trip to the goodwill to make, and there is still a piece of exercise equipment in the corner which is waiting to be picked up. Once that's taken care of, I move in the last of the electronics (oh so excited to have my own TV!), and the Short Bus and I will be all set in our new little 'apartment.'

Well, its more like a room... but a biggish room.... pictures anyone?

my 'bedroom' area (not sure how I feel about the sheers, I think they're coming down): 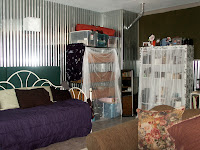 The 'living' area (the TV will eventually be on that table): 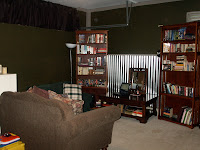 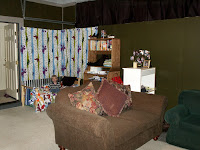 Time to hang some pictures, and add some little detail-y stuff. Anyone want to come over and help?
posted by Giddy. at 12:16 PM 5 comments:

I know, I know 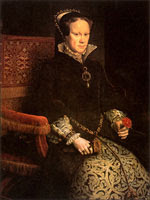 At this point, I haven't slept in my own bed for nearly two weeks.
No one wants to give me a job. My bank account is dwindling.
My truck sucks down too much gas, I really need to go trade it in (I love my truck).
Its looking more and more like I can't (and really shouldn't) go down to Southern Faire this weekend.

hm... yeah... a little down today.
I know it will get better. I know good things are coming. I know I'm being impatient. I know I could use a good cry. I know my best friend just handed me a bloody mary, I suppose life could be worse.

1. Grab the nearest book.
2. Open the book to page 23.
3. Find the fifth sentence.
4. Post the text of the next three sentences in my comments.

The book closest to me doesn't have three sentences beyond the fifth on page 23, so I'll just post the whole page:

The five colors blind the eye.
The five tones deafen the ear.
The five flavors dull the taste.
Racing and hunting madden the mind.
Precious things lead one astray.

Therefore the sage is guided by what he feels and not by what he sees.
He lets go of that and chooses this.

Yes, I know.
I've been quiet.
A little too quiet if you ask me.

I have been so busy I haven't even had time to write down the thoughts that do occur to me. I also haven't spent much time on my own recently, which also takes away from my writing.