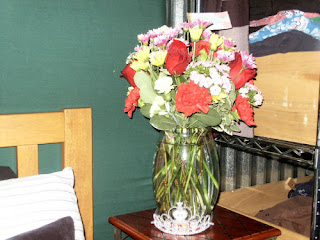 My job is such that if one doesn't laugh, they will most definitely cry. With the insane amount of frustration and stress, it is absolutely imperative to find the funny, and squeeze every last drop out of it.
Some days... the funny finds you...
Student: "Why do you always dress like that?"
Me: "Like what?"
Student: "You always wear black."
Me (mildly uninterested): "Oh... yeah... guess its just my style..."
Student: "Are you really what you said you are? Ya know, when you aren't here..."
Me (becoming slightly more interested): "uh... what did I say?"
Student (leaning in and whispering): "You know... that thing...."
Me (now I'm amused, but assuming a very serious face & attitude): "A Pirate?"
Student: "Yeah... that..."
Me (VERY serious): "Well of course. I wouldn't lie about that kind of thing."
(I went around whistling and/or humming "Yo Ho A Pirate's Life for Me" for the rest of the day, just to keep up the illusion)
*later that day*
Loudest Boy I've Ever Met is eating lunch: "These crackers taste like tea bag!"
Me: Shooting a pointed look at my co-worker, and trying to pretend I didn't hear it, yet, wanting to make sure I wasn't the only one who did.
Vegan Co-Worker: "LoudBoy ..... um..... what did you just say?"
LoudBoy: "I SAID, 'these crackers taste like tea bag'... because they really do."
Me: Staring at Vegan Co-worker pointedly the whole time... until I fall apart... silently.... the tears of laughter (and tears from the pain of trying to contain myself) streaming down my face.
Vegan Co-Worker: Obviously heard the same thing I did (twice)... he just closes the door leaving me to bask in the inappropriate humor .... alone.
I should note that Vegan Co-worker and I were the only ones who found the humor in LoudBoy's commentary. Nothing like a tea-bag joke that only two people in the room get.
*minutes later*
Boy With a Heavy Mexican Accent: "Is there anything you can't eat with your false teeth?"
Vegan Co-Worker: "Well yeah, rocks and trees and stuff."
Boy With a Heavy Mexican Accent: "Oh... I ate a lady once."
(note: exactly what this kid meant is unclear... there are some things one just doesn't ask for clarification on)
Yes, it seems my job really is a LOT like faire.
As if all this hilarity in one day wasn't enough, I had a beautiful bouquet of flowers show up when I got home this afternoon. Thank you SO MUCH Mr. Nanning! I am so touched, you have no idea how much I appreciate it. And, even more so because this is the first time I've ever had flowers delivered to me (I've gotten flowers before, but have NEVER had them delivered from a florist)... such a wonderful surprise. They have their own little table right next to my bed.
posted by Giddy. at 3:43 PM

I'm crying, tears are streaming down my face I am laughing so hard... I can hardly type....

Ooh someone got flowers.