Camp Lazy... The Morning After 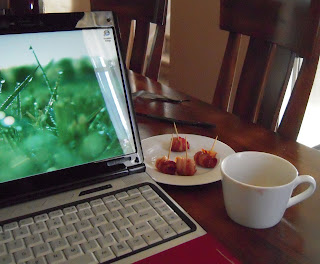 After barely sleeping Friday night, I woke up Saturday morning feeling... well, perhaps it would be easier to say that I woke up NOT feeling hungover. Just tired. Seriously. Tired.

By mid-morning, we had dubbed Saturday "Camp Lazy." The weather was perfect, and as the four of us who were still struggling to wake up dozed and giggled in the swing in CamiKaos's back yard, Dr. Normal (Mr. Kaos, Cami's husband) appeared.

Doc: Is there any Cava [Champagne] left?
Cami: I don't think so.
Giddy: Yes, actually, I think there is a bottle left in the cooler.
Cami: Unopened?
Giddy: Unless you opened it after I went to bed.
*note: Giddy always knows where the last of the champagne is*
Doc: What about pineapple juice?
Giddy: There should be some in the cooler, and half a can in the fridge.
Doc: Would you guys like Pinosas?
*Giddy decides Dr. Normal is Brilliant, and even more awesome than he seemed the day before*

I literally watched Dr. Normal make the drinks, go get straws, and deliver them to us, with my jaw on the floor. Not that I don't know any guys who would do this, in fact I know several... though I didn't really think about that at the time. What I thought was that this man just opened his house to seven guests (the first arriving 24 hours before), fed us, purchased drinks, did all the work on the podcast, didn't seem to mind having a bunch of screaming, giggling girls take over his house and back yard, and STILL offered, made, AND served us drinks in the morning.

The last time I had a girl's night and a husband at the same time, my (now ex-) husband seemed to make it a sport to be as grumpy and rude (and generally unwelcoming) as possible to our guests. It was a game he played, to see how fast he could get "my" friends out of "his" house by making them feel unwanted and uncomfortable. Luckily, I had a few friends that understood this game, and played 'annoy the asshole' before they left.

Once everyone had gone home, CamiKaos and I figured we should actually plan something to do (or not do) for the day. I believe the short list was something like: "go out and do something, stay in and do something, go out and do nothing, stay in and do nothing." We opted for Wii, Tiki drinks, and CamiKaos's Rumaki . Yes, water chestnuts, wrapped in bacon, soaked in soy sauce, and cooked. Who knew that could be such a tasty treat?

Later, Dr. Normal made a fabulous dinner. Seriously, Alaskan Sockeye Salmon grilled on an Alder plank, herbed up perfectly, with just a dash of saffron... it was wonderful. They shared some fabulous Oregon wines with me, and I just can't say how much I enjoyed sitting around the table after dinner chatting about food and wine, and of course, a little dessert Wii before bed.

Sunday was mostly get up and run to the airport, hugs all around and a promise to come back and visit in the near future.

Once I landed in Smoke-ramento (ick), I found a text message from CSB, with an offer to meet me back at my place. *schmoopy sigh* He even brought dinner with him... amazing left over bbq that he had prepared Saturday night. Not only was it great to see him, but the food was delicious, and totally saved me. I had been planning to have Guinness for dinner since it was really the only thing I had in the fridge that didn't require effort.

Over all, a fantastic weekend, and I couldn't have imagined a better way for it to end.

**Photo is actually Sunday morning breakfast... coffee and left over Rumaki -and of course my new laptop... because the interwebs is part of a balanced breakfast**
posted by Giddy. at 8:00 AM

yes Mr Kaos is totally a keeper... but in fairness it was Martin who got us dinner the night before...

We were so thrilled to have you here, we had a great time.

I'm so glad you had such a great time. The Kaos household is definately the place to be to get spoiled.