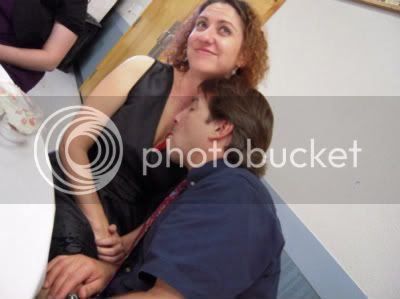 (Because my pictures of the ceremony came out a bit dark and blurry, I give you Gummy Worms in my cleavage! "oooh! A piece of candy!")

Can I just say... (and since it's MY blog, I think I can) that I am terribly proud of myself?

As is normal for me at any wedding, I jumped in and helped out where I could. I've been involved in so many weddings, I seem to have a pretty good idea how they work. Of course, before the ceremony, I did a lot of pacing and reading over my part, and trying to get my hands to stop shaking (again, the glass of wine, an invaluable tool).

As the ceremony began, I found myself standing in the wrong place. I was told the bride and groom were going to be ON the stage, not on the floor in front of it. No problem, I step down without breaking my ankle or landing face-first in the bride's cleavage (thank goodness I chose to wear flats instead of heels).

I briefly consider my brother's wedding, where I had ZERO volume control, and yelled at everyone for a second before figuring out that I could bring it down a notch. I briefly consider the microphone that is stratigically positioned on the stage (where we were "supposed" to be). I hear CSB in my head saying, "don't worry, you'll be fine," and then, "remember, if you think you are going too slow, you probably aren't, slow down even more." And, then I begin.

I hear my voice in the hall. I can feel it hitting the back wall, and NOT returning to slap me in the face. I hear it clearly and slowly pronouncing the words correctly, not stumbling over the slightly tongue twisting rhymes, and not going too quickly (so I slow down a little, and smirk at CSB). Deep breath. Holy crap, this is going well. I pause for laughter in the right places, I wait for applause at the end before I present the happy couple, I introduce them and say the right name.

Quickly, finish my glass of wine, then outside for pictures (really, I can't wait to see the "Morris Family Photo"), then back in. The rest goes as a typical wedding should. Eating, drinking, dancing, dollar bill tucked into my bra... the usual.

I had a couple of dances with CSB (which really made my night... maybe someday I'll tell the story of why dancing means so much to me), stole cupcakes from the Berg children, and the Morris Enterprises Team went out for dinner when all was said and done.

By the time we woke up Sunday morning, I felt fully justified in a day of lounging on the couch and watching movies. Happy with myself, happy with CSB, happy to have seen good friends (friends I don't get to see often enough), yes... overall, very happy.
posted by Giddy. at 4:58 PM

Awwww They will eat green eggs and ham together forever all because of you!!!

did you perform the cermony?
wow?

It is ok to be proud of myself for a job well done right? *blush* Is it ok for me to brag about it on the interwebs?

Yay for you! And yay for the James Woods Family Guy reference (Ooh! A piece of candy!)

OMG! I'm so happy someone got that reference! hahahahaha!

That's actually a direct quote from the moment... one of us said it, the other laughed.